Comment: Going straight ahead where we could oversee the banks and clay reefs with ease. In that respect the Secchi visibility comes closer to my feeling of distance than Dutchi in this case. First we spotted a big eal at about 13 mtr dept after 2 minutes in the dive. At about 8 minutes we passed the reef at 15 mtr depth. There I saw an eal tail. Normally the head sticks out on the other end, but in this case the head was no where to be found.
As we came in the deep section there were some prints in the bottom where big fish had rested. It is awesome to see how many big blocks are scattered on the bottom. Besides a few dust clouds it was nice and clear. We turned right where actually the bottom ascended pretty steep going up to 15 mtr and less coming from 18 mtrs. An anchorchain with an airtube attached and some flexible pipes stuck in the bottom. Along a ridge we swam back into the deeper bit. There I spotted a smaller catfish of about 1 mtr long. We covered our lamps to avoid scaring the catfish. Dark olivegreen with white edges on it’s tailfin and pectoral fins. At that point Remko joined us after he had problems with his divegear, but had managed to fix it afterall. We ascended left from the Paviljoen which I had in mind. We swam to the outer measurepile and did a visibility reading on Dutchi and Secchi.
After that I checked out the SETL plates which will be taken to the surface next week. 3 months pass very quickly.
At the measure pile a dark brown layer of (I believe) diatoms are settling over the bigger mussels. There are a few big sized musselcolonies on the pile where the smaller ones had dislodged. At this tempature though younger mussels of about 2-3 mm are starting to grow near and on the rope.

H136 is home to many young shrimp and young (white quaga?) mussels are growing steadily.
H106 the common fishleach is gone again. At edges the same brown layer of diatoms are present.
At the line and knot of the brick a snotty or bryozoanlike growth is attached. funny is that H136 doesn’t have it.
So it is apparant that within a meter distance of each other  growth is so very different.
Unfortunately I do not have photos.

NEXT WEEK IT IS SETL SUNDAY!!! 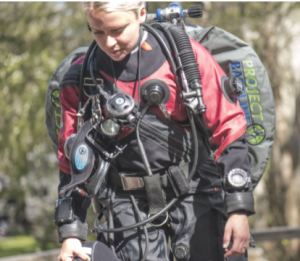