Ga naar de inhoud
Comment: Paul and I head out the the measurepile at 3 mtr. We noticed a brownish layer at the bottom and clayblocks. Visibility has decreased dramatically from 12 to 7,5 mtr in 10 days.
There is word that there was a trial run of the airpumps last week.
Also pieces of Cod lie at the bottom next to the restaurant.
After I did my usual visibility check and photo we went south.
Just above the bottom the visibility is better due to the mussels who filter the water. Above that layer of about a meter thick the visibility varies from estimated 7-10 mtr
After a while we altered the course more west until we reached the SW pontoon. The airhose is detached from the airplate and lies on the bottom. We followed the hose over the bottom going south. Beautiful clay blocks and a sloping bottom. This is my favorite spot. As we passed a dune I saw a tree trunk of about 30 cm thick and about a meter long stuck in the bottom. We headed North as the visibility was good in the SW area. Also much more copepods in the SW area then in the dive area.The further we approached the restaurant the worse the visibility got.  At 5 mtr an orange object caught my eye and it was a goldfish. It was damaged at the tail. Maybe by a Herron. ﻿﻿﻿﻿

﻿Under the restaurant there was floating sediment as they were cleaning the deck of the restaurant. I took a sample of the brownish gelatin to check later under de microscope. ﻿﻿﻿Clearly the persisting low temperatures is taking it’s toll on fish. The temperature is 4 degrees lower than last year.

If you wonder what is in this brownish gelatin then take a look here. It would be nice if someone

could help me identify it all. Here is a movie of the very active organisms 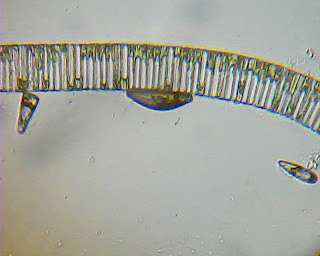 Cone shaped diatom on the left:
Could be -> Surirella.

The diatom attached to the long string in middle:
Could be -> Cymbella. 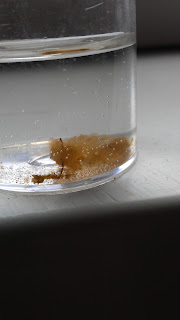 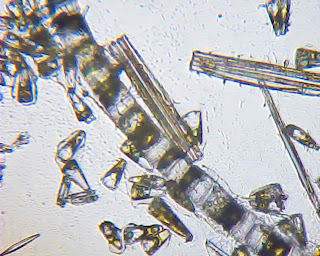